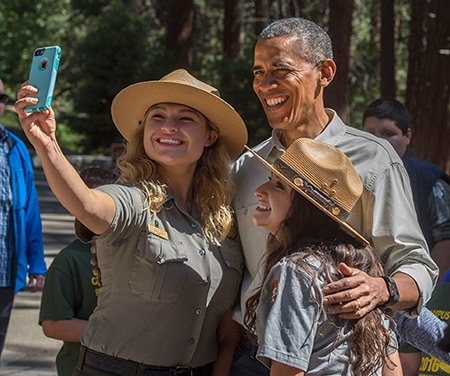 UC Merced has been partnered with Yosemite National Park since before the campus opened, and each your, our collaborations with the park only grow stronger. We’re the only campus to have a research station in the park, which allows faculty, students and others to work and learn in one of the most beautiful, diverse and interesting ecosystems in the world.

Throughout the year, no matter the season or weather, it's common for students, faculty and staff members to head for Yosemite to enjoy the breathtaking views, and hike, climb and camp, or to conduct research in and around the park and Sierra Nevada on topics such as climate change, plant evolution, archeology and anthropology, solar energy, hydrology and engineering. Researchers from the Sierra Nevada Research Institute and all three schools at UC Merced take advantage of the living laboratory that is the Sierra Nevada.

Students, some of whom have never been to the park before they come to UC Merced, forge their own relationships with the park, whether it’s the first-year students participating in the Week of Wilderness trip that takes them into the off-trail areas of Yosemite for hiking, camping and bonding with fellow students, more experienced students taking day or weekend trips to enjoy the park or joining the Yosemite Leadership Program and actually living and working in the park as rangers.

YLP offers students many unique opportunities to learn about park operations, educate schoolchildren and other park visitors about environmental stewardship and other topics, explore the Sierra and learn about themselves and what they are capable of as they become the next generation of leaders. YLP graduates who graduate from UC Merced are also eligible for direct hire into the National Park Service.

And there are the random opportunities for selfies with an American president. In summer 2016, the park hosted President Barack Obama and his family. YLP and Wilderness Education Center rangers met with the First Family, helped organize the visit and involved the president and first lady in lessons for fourth-graders who were visiting and got the surprise of their lives when the Obamas showed up to learn how to scare bears with them.

The central and south entrances to the park are less than two hours from UC Merced, and there are bus and other day trips to the park all the time. Visit the Wilderness Education Center on campus to get schedules and rent equipment for hiking and camping. You can also take a class in the park, through the California Naturalist program and UC Extension educational excursions in the park.